Charles “Chuck” Stevens’ ingenuity founded Stevens Cabinet Company in 1956. It wasn’t long before an opportunity to have a small shop in the back room of a Teutopolis lumber yard became reality. This facility, however, wasn’t huge by any means, since to plane lumber longer than 8′ in length required feeding the lumber through an opened door to the lumber yard’s front lobby.

Overcoming challenges became Chuck’s normal practice. 1960 was a major step forward with the construction of a free-standing building on the edge of Teutopolis. Chuck Stevens had hired his first employee, Edward Buenker, who retired from the company over 40-plus years later. Chuck and Ed hand-dug the footing for this new facility. Additional employees became part of Stevens Cabinet Company over the next few years. The company became known for its high quality and forward-thinking designs. It was said, “When you had a Stevens’ kitchen, you had the best.”

The late 60’s proved to be exciting times with more facilities and increased production. Having gone to education shows and exhibits, Chuck realized a new trend in architectural designs. Cabinetry fully laminated inside and out in contemporary colors and designs was gaining attention. This was a watershed moment for Stevens Cabinet Company. How to design these units would certainly be a challenge, but more so it was an opportunity. It was a major change in construction, methods, and materials that certainly would require new technologies. Stevens initially laminated the laminate surfaced panels required. It also needed panel sawing equipment and a way to edge panels, since no after-assembly finishing was possible. Very quickly Chuck discovered another form of pre-laminated panel to work from.

The company maintained a steady-step-at-a-time approach. Adding a few dealers and changing Stevens’ whole way of thinking about the products was not easy. New catalogs and ultimately discontinuing the production of its mainstay all-wood kitchens required guts and faith in his decisions. There were years when business was very slim, but perseverance and ingenuity to those challenges as well brought Stevens Cabinet Company through.

The early 70’s brought a new facility and additional equipment that was based around flat panel processing techniques. The late 70’s found Chuck traveling to Germany to visit both Interzum and Ligna woodworking exhibits. It was here that the equipment not common to the U.S. struck a nerve. However, these machines only used the metric form of measurement. Not to be deterred, the company converted what was now “Stevens Industries” to use millimeters, the metric system, instead of inches to produce its products. Conversion to inches and feet was only used for communication to the customer; everything internal was in metrics. Sources of laminated surfaced panels continued to be challenging. Upon some investigation and subsequently meeting a machinery distributor, European Machinery Company, a sizable investment in direct melamine laminating was made in 1979. Two days of production with this new technology yielded enough materials for two weeks of production. 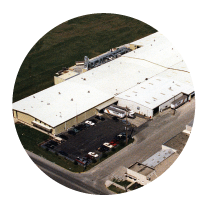 The direct melamine laminations opened up a whole new market opportunity. There had to be others who needed this product. Ultimately, a total of three melamine laminating lines and a veneer hot press began providing products. Demand for fabrication of laminated products made the 80’s a time of many building expansions as well as technologies in manufacturing techniques out of Europe.

Chuck insisted on trying the latest, and many times the equipment brought to the states was one-of-a-kind and the first to the U.S. Stevens had the second machine in the U.S. for postforming with environmentally -friendly PVA adhesives. Also after several months of analysis, Stevens’ cabinet lines were fully converted to (what today is common) 32mm dowel pinned joinery. Stevens was one of the first in the U.S. to convert. There were several changes in sawing equipment, combination edging machines, thru-feed drilling and pinning as well as some of the first CNC drilling and routing machines. Stevens Industries was named Innovator of the Year by the Woodworking Machinery Importer Association Companies.

Continued expansions and conversion to CNC technology in the early 90’s ultimately placed over a dozen point-to-point drilling and routing machines in the factory. One such machine was the only of its kind in the U.S. It was giving up the past to allow moving forward. As in any business, there are ups and downs, and Stevens was no exception. However, due to perseverance, ingenuity and willingness to try new things, the company continued to advance.

In 1998, however, Chuck had had as much fun as he wanted and decided to sell out his interest in the company he founded. What started in a two-car garage had undergone multiple expansions and now stood at 360,000 Sq Ft of manufacturing facilities on 31 acres. The transfer of ownership resulted in remaining shareholders, and a large portion converted into an ESOP “Employee Stock Ownership Plan” company. 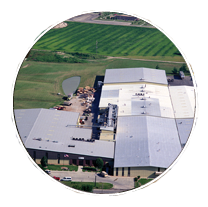 The first decade of the 2000’s extended the company’s entrepreneurial spirit with further conversions to the latest technologies. The second decade of the 2000’s began with the passing of the beloved company founder, Chuck Stevens, and his legacy of ingenuity lives on. 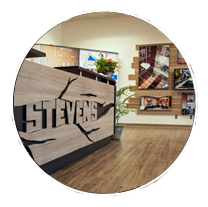 Today, Stevens Industries continues to be an innovated and re-invented company of high volume production and flexible change-overs. Production today includes unique texture and pattern products in laminating, advanced fabrication techniques, and a one-stop-shop for medical, educational, and commercial interior cabinetry and millwork.

Stevens Industries, now a 60 year-old company, with 450,000 Sq Ft of production space and 500+ employees, continues to be a privately held employee owned company.

In 2018 Stevens purchased a rail-served facility of 200,000 square feet. Located just five miles from their current operations, the expansion will increase capacity for StevensWood laminated panels by 40-percent.